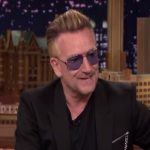 Bono showed off his generous side over the weekend when he left a $150 tip on top of a $20 bill for a L.A waitress.

After U2’s gig at LA’s Forum venue Saturday night, the band popped to Canter's Deli in West Hollywood for a bite to eat.

There he was served on by a waitress who is said to have worked there for 50 years.

According to Billboard, the Dublin native asked her to pick out his meal, which she did, a veritable mish-mash of classic Jewish deli fare including a corned beef reuben, french fries and onion rings.

She then follow it with chocolate rugelach for dessert, on the house.

It must have been some corned beef reuben as the frontman was so happy with the service that he left a generous $150 tip for the lucky waitress.