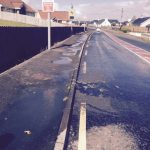 Serious concerns have been raised regarding unfinished estates in Donegal.

At last weeks council meeting, a report entailing a revised arrangement for taking charge of housing developments was introduced to councillors.

While adopting the report, some councillors expressed dissatisfaction saying it was too little too late.

Seven estates in Stranorlar alone are affected, 22 in Letterkenny and 23 in Inishowen.

At one estate, Dromore Park in Killygordon,  sewage is running out onto private driveways and near a local school.

Local Councillor Patrick McGowan says people in these houses are paying for services they're not getting: