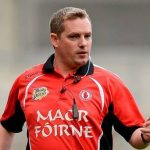 Tyrone will not contest an eight-week ban handed down to assistant manager Gavin Devlin, but they are to appeal the €5,000 fine imposed as a result of a half-time fracas during last month’s Ulster Championship clash with Donegal.

Devlin will be excluded from the sideline for side for the All-Ireland Qualifier opener on June 27, after the county board confirmed it is to accept the punishment imposed by the GAA’s Central Competitions Control Committee

Donegal were also fined €5,000 as a result of the melee which broke out as the players and officials arrived at the entrance to the tunnel on their way off the pitch for the interval.