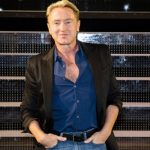 As the voting commenced and the public decided who to crown the Britain’s Got Talent winner 2015, ITV was faced with filling the difficult minutes between the end of the acts and the announcement of the victor. And for some reason, somebody at BGT HQ decided it was a good idea to stick Irish American tap dancer Michael Flatley in that void.

After an evening of impressive acts, Michael and his band of merry tappers took to the stage. Viewers on a Twitter shared their, erm, mixed responses.