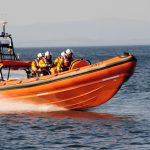 The body of a man has been recovered from the water near Killybegs Harbour.

There were initial reports of a missing fisherman in the area.

Killybegs Coast Guard were tasked by Malin Head Coast Guard earlier this afternoon to carry out a search.

After some time,  Killybegs Coast Guard recovered a body from the water.

The body was removed from the scene and taken to Letterkenny General Hospital.