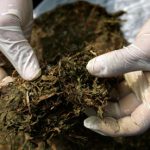 Three arrests were made  for drugs possession in Derry over the weekend.

The three  men, aged 28, 21 and one juvenile have been  reported to the Public Prosecution Service.

The searches were carried out in  properties in Gobnascale, Spencer Road and Foyle Springs area of the city and suspected drugs were found.

It is thought all drugs found during these searches were cannabis.

On Friday evening,  a separate search was conducted in the  Foyle Road area.

A 20 year old man was arrested on suspicion of possession of Class A drug and possession with intent.

He has  been bailed pending further enquiries.