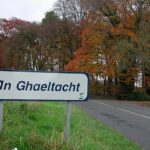 According to a report commissioned by Údarás na Gaeltachta, Irish is dying out in Gaeltacht areas.

The study was conducted using census figures for 2006 and 2011, it says that use of the Irish language in Gaeltacht regions is confined to the classroom, and is declining in communities.

The research concludes that of the 155 electoral divisions in the Gaeltacht, only 21 are communities where Irish is spoken on a daily basis by 67 per cent or more of the population.

Speaking to Highland Radio News, Minister for the Gaeltacht, Joe McHugh says there are challenges to be addressed: