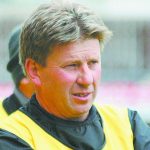 Ray Durack will not be taking on the role of Donegal Manager for another term.

Following last weekend's defeat to Armagh in the semi final of the Nicky Rackard Cup, Durack told the players he was stepping down.

This year, under his guidance, Donegal retained their place in Division 2b of the National Hurling League having made the move up in 2014, the highest level Donegal have ever played in the league.

The highlight of his term was in 2013 when Donegal where crown Nicky Rackard Cup Champions.