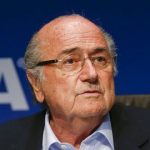 European football's governing body UEFA is considering boycotting today's start of the FIFA Congress in Zurich - believing it could turn into a "farce".

Seven FIFA officials were arrested in Switzerland yesterday as part of a US-led corruption inquiry.

UEFA want tomorrow's presidential election to be postponed - when Sepp Blatter will be going for a fifth term.