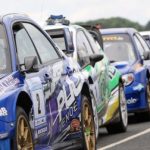 The entry list has been released for next month's Joule Donegal International Rally.

Defending Champions Declan and Brian Boyle will be the first of the start ramp sporting a brand new Ford Fiesta from M-Sport.

The Leitirmacaward crew have had a troublesome year with the Subaru and have decided to step away from the car that brought them so much success and hope that a new piece of machinery will give the Tarmac Champions a bit more luck in Donegal.
Donagh Kelly has been in fantastic form this year with regular victories on both the Tarmac and National Championships. The Frosses man will have Kevin Flanagan on board the Focus WRC seeded from number 2.

2012 Champion Garry Jennings is seeded at 3 with Rory Kennedy sitting alongside the Kesh man.

The rest of the top ten is made up of Derek Mc Garrity, Seamus Leonard, PJ McDermott, Stephen Wright, Martin Doherty and Tommy Doyle.

The National battle has the billing to be the best ever with all the top two wheel drive crews heading for the championship showpiece event.

Last year's winner Gary Mc Philips is the top seed at 15 but he'll be feeling the pressure of the highly talented drivers behind him.

The Joule Donegal International Rally Ireland takes place from Friday 19th - Sunday 21st June and Highland Radio will have all the LIVE action, stage by stage over the course of the weekend.