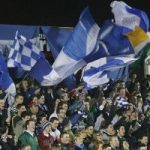 Last season Harps reached their first semi-final in the competition in fifteen years but didn't face a team from a Division above them until the last four meeting with St. Patrick's Athletic at Richmond Park.

And in Longford - who were First Division Champions last season - Harps face a step up from any side that Ollie Horgan's men have faced in the league this season.

“Longford have done well this season in the top division,” said Harps boss Horgan ahead of Friday's game at the City Calling Stadium.

“Tony Cousins has a great mix of youth with the likes of Jamie Mulhall, Kaleem Simon and Ben Mohammed added to the class and experience of Stephen Rice, Mark Salmon, Pat Sullivan and Kevin O Connor. Sullivan and Shaw are a handful for the top teams, let alone us,” he warned.

“We played Longford four times last year and failed to score in any of those games,” continued Horgan, stressing the difficulty that Friday's opponents pose. “They have improved again from that so it will be very difficult to go there and get anything out of game, let alone score.”

Last Friday night, Harps created a little bit of history at Finn Park as they started a league campaign still unbeaten after twelve games for the first time.

“It's a good start but that's all it is,” said Horgan. “We need to improve as other teams have and will. UCD, for example, are a better team now than when we played them last so we need to try and improve also.

Looking ahead to Friday, this is the fourth time the two clubs have been paired together in the Cup with Harps progressing on the first two occasions and Longford last time out. The most recent meeting was four years ago when Longford progressed on a 1-0 scoreline in a Finn Park replay after the club had played out a scoreless draw in the midlands.

Packie Mailey was able to take his place on the bench for last Friday's game against UCD and is available to make his first appearance of the season against Longford but Keith Cowan and Brian McGroary remain sidelined.

Should Friday's game finish in a draw, a replay will take place at Finn Park on Bank Holiday Monday, 1st June, at 8.00pm in Finn Park.