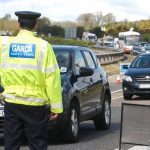 Since 2010, 256 people have been killed between June and August in Ireland.

The majority of fatalities occur on rural roads, and between 2010 and 2014 twenty-two people in Co Donegal tragically died on during the summer months.

Garda Traffic Inspector, MIchael Harrison says there will be more Garda checkpoints this weekend, and he is urging motorists to slow down:

December 2, 2021
Stormont's Health Minister says he wants to avoid bringing back tougher covid restrictions. This week has seen the introduction of vaccine passports, and a tightening...