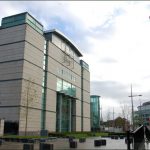 A Strabane man has been sentenced to life imprisonment after admitting murdering a man and woman in Belfast.

Shaun Hegarty pleaded guilty to the murders in at Belfast Crown Court yesterday.

The bodies of 40-year-old Caron Smyth, and 42-year-old Finbar McGrillen, were discovered in Mr McGrillen's apartment at Ravenhill Court, on 13 December 2013.

Both men denied the charges, but Shaun Hegarty was re-arraigned yesterday and pleaded guilty to both murders.

The two men had been due to be tried together at Belfast Crown Court.

Hegarty, formerly of Strabane, but whose address was given as HMP Maghaberry, was given a life sentence.

The judge informed him that the minimum sentence he will have to serve before being considered eligible for release, will be set at the conclusion of the trial involving co-accused Ciaran Nugent.

His trial on charges of double murder begins on 27 May.