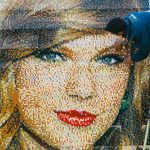 If ever you needed any more of a reason to head down to Legoland Windsor, the theme park have unveiled their latest bait – a gigantic mosaic of Taylor Swift made out of thousands of tiny Lego bricks.

To celebrate the opening of their brand new Heartlake City area, Legoland quizzed youngsters on their dream best friends and Taylor emerged the favourite (though we can’t say we were really surprised) beating the likes of Zoella, Ed Sheeran and Olly Murs.

The masterpiece was created by loyal Swifties (that’s what the singer’s fan base are called, don’t you know) over two days, which involved piecing together 35,840 Lego bricks to capture every detail of the music sensation.

Just this morning all 140 different Lego sections of Taylor’s portrait were assembled together for the unveiling of the striking artwork, which can be seen at the resort until May 31.