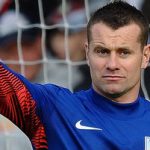 Shay Given is in a battle to be fit for Saturday's FA Cup final against Arsenal.

The Lifford man is hoping to return to training with Aston Villa on Thursday or Friday to prove his fitness to manager Tim Sherwood.

Sherwood has admitted he is unsure if Shay will make the Wembley showpiece.

Given's non appearance at the club's press conference on Monday has added fuel to speculation that he will not be between the posts on Saturday.