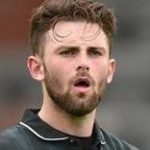 Republic of Ireland U21 Head Coach Noel King has named his squad for two games early next month.

Ramelton's Kyle Callum Mc Fadden has been named in the side to meet England C at Eamonn Deacy Park on Monday, June 1 (3.00pm) and then an England U21 select in a restricted entry fixture at St George's Park on Friday, June 5 (3.00pm).

Ireland U21s began their qualifying campaign for the 2017 UEFA U21 Championships with a 1-0 win in Group 2 over Andorra in Waterford in March thanks to a Dylan Connolly goal. Their next competitive game is away to Andorra in September.

REPUBLIC OF IRELAND U21 SQUAD: