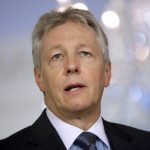 The North's First Minister Peter Robinson has been admitted to hospital for a suspected heart problem.

A statement from the DUP says Mr Robinson "felt unwell this morning and has been admitted for some further tests."

Deputy First Minister Martin McGuinness says he's concerned to hear the news - and says his thoughts & prayers are with Peter Robinson; his wife Iris and the rest of the Robinson family.

There are no further details at this stage.