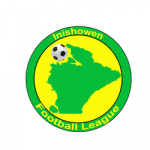 An early goal on 12 minutes by Stephen McLaughlin set the Inishowen League up to take the Oscar Traynor Trophy at Maginn Park on Sunday.

Inishowen played good football and added to their lead on 34 minutes when Kieran McDaid scored a cracking goal but the Limerick League pulled one back just before the half time whistle.

The Inishowen League were able to withstand a strong Limerick attack in the 2nd half to take the title.

The victorious Managaer Dermot O'Brien was delighted with the Inishowen victory when he spoke to Myles Gallagher on Sunday Sport .......