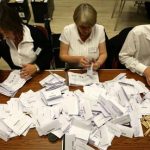 Counting is getting underway across the country to see if the country has voted to allow same sex marriage and reduce the minimum age to run for president.

Votes cast in Donegal North East are beng counted in Bonagee, Letterkenny and in Donegal South West, counting is underway in the St John Bosco Centre in Donegal Town.

Tallies will be done as the votes are seperated, with formal counts expected in the early afternoon.

It's expected national results will be announced late this afternoon, but a clear picture of how the people have spoken will be known in a matter of a couple of hours.

After months of campaigning and 15 hours of voting yesterday, the moment has arrived.

Ireland's made history by putting the issue of marriage equality to a popular vote - and we're about to find out if it has passed.

Most observers expect it will, and with a two to one majority.

Boxes are now being opened across the country and the ballots are being separated - the counting of the presidential age votes won't take place until later, the Carlow-Kilkenny by-election votes will be counted at the same time as the marriage referendum.

The formal declaration won't happen at the national results centre in Dublin Castle until after 4 o'clock this afternoon, but tallies are expected to show by 11am what the likely result is.

Turnout was high - in percentage terms it probably won't be the highest in Irish referendum history, but with a large electorate the number of votes cast will be a historic high.

But Minister White, who's also the Labour Party's Director of Elections, says he won't be speculating about what the on the age profile of voter turnout could mean for the result of the Marriage Referendum...............