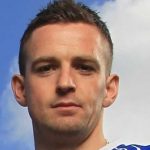 Finn Harps moved seven points clear at the top of the SSE Airtricity League First Division with a 2-2 draw against UCD in Ballybofey.

As the game approached the hour, the students scored a stunning opening goal, a 30 yard volley by John Watson.

On 66 minutes Harps levelled the game for the first time as Ruairi Keating headed over UCD keeper Niall Corbet.

UCD we're back in front with six minutes remaining, Robbie Benson playing the ball low into the corner.

Kevin McHugh however was the hero for Harps once again, as the Killea Man got his head on the end of a Damien McNulty corner to give the Ballybofey boys a point and keep the leaders unbeaten record intacted.

Ollie Horgan's side have increased their advantage after the game between Wexford Youths and Athlone Town had to be abandoned at Ferrycarrig Park when the generator caught fire, with Wexford leading 2-0 at the time.

Also tonight, Shelbourne beat Waterford United 1-0 at Tolka Park and it finished 2-all between Cabinteely and Cobh Ramblers