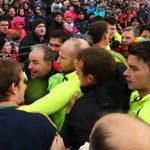 It's been confirmed that both Donegal and Tyrone have been handed 5000 euro fines for their part in the half time brawl in the Ulster Senior Championship opener last weekend.

Tyrone selector has been Gavin Devlin was hit with an 8 week suspension for his part in the altercation.

Donegal County Board chairman, Sean Dunnion said an appeal may be lodged against the fine handed to Donegal.

It's understood that Tyrone were in breach of protocol, as Donegal were to leave the field first.

It's also reported that the Tyrone County Board will appeal Devlin's suspension.