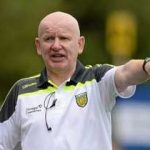 Much has been made about the off the ball behaviour of players during the senior game  and earlier this week, details emerged about some unsavoury behaviour during the minor game as well.

Writing in his column in the Donegal News - Bonner describes the abuse of his team captain, Michael Carroll as toxic

It's claimed two Tyrone players mocked the 17 year old about his father's death in February last year from cancer.

Bonner has said that if this is what's going to happen in games, he doesn't want to be part of it.

He added “I would rather walk away than be involved in something that has become so toxic.

“Sledging is part and parcel of the game now, but there are certain boundaries that should not be crossed.

"This whole thing has gone to a new level and in our minor game against Tyrone on Sunday, those boundaries were crossed to sickening levels.

“We all know that this goes on and I think everyone accepts that it just has become a big part of the game now, but when the verbals extend to the bereavement of a family member or a loved one, there has to be a line drawn.”

But in this morning's Irish Independent, former Tyrone defender, Ryan McMemanin - who is a selector with the Tyrone minors - insisted he would not encourage or condone the type of sledging that went on last Sunday.