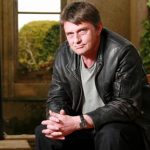 Composer Mike Oldfield has thanked fans for their messages of support after the sudden death of his eldest son Dougal.

The 33-year-old collapsed and died while working as an editing assistant at a film production company in Soho, central London on Sunday.

Police initially treated the death as unexplained, but a post-mortem examination has reportedly confirmed Dougal died of natural causes.

The 62-year-old musician has released a family statement which said: “The family are touched by the messages of love and support.
“They do ask that the family’s privacy be respected at this difficult time.”

Oldfield had Dougal with his second wife Sally Cooper. He had an elder sister Molly, a younger brother Luke and four half-siblings.

Oldfield had two children with Norwegian singer Anita Hegerland, and two sons with Fanny Vandekerckhove, a French horse breeder, who he married in 2003. They have since divorced.

Oldfield is best known for his 1973 instrumental hit Tubular Bells, which featured in horror film The Exorcist.

It was the first album to be released by Richard Branson’s Virgin label and its success helped contribute to that of the Virgin empire.

It remained at the top of the charts for 250 weeks and has sold 16 million copies.

December 4, 2021
The Taoiseach has denied new Covid restrictions are an admission of failure by the Government. New measures were announced last night which will mean...

Have your say on DCSDC physical activity & sports strategy