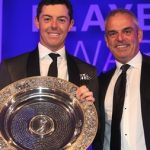 The world number one was honoured at the European Tour's annual awards night ahead of this week's PGA Championship at Wentworth before then playing host to this year's Irish Open at Royal County Down.

The 26-year-old has returned to Europe after a successful spell in States where he won the WGC Accenture Match-Play Championship as well as last week's Wells Fargo Championship.