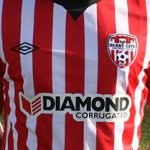 Derry City's EA Sports Cup run came to an end on Tuesday night as The Candystrips lost 1-0 to Shamrock Rovers in the quarter finals.

Rovers have made it through to a record breaking 16th League Cup semi-final, thanks to Sean O’Connor’s excellently taken free kick in the first half.

It's been a difficult period for Derry who have won just one of their last eight games and have failed to score in their last four matches.

This Friday night Derry face Sligo Rovers in a Premier Division game at the Brandywell (7.45pm).