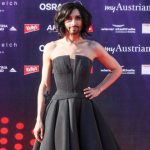 Conchita Wurst has kicked off the Eurovision Song Contest 2015 in Vienna with a rendition of her winning song Rise Like A Phoenix.

The Austrian singer was crowned the victor in last year’s contest, making her country the host for this year, and she opened the evening by reminding us all why so many viewers across Europe were moved to vote for her last year.

Wearing a figure-hugging, long white gown, Conchita belted out the hit at Vienna’s Wiener Stadthalle, showing off the arena for the first time this week in part one of the semi finals.

She was joined on stage by all of the evening’s competing acts towards the end of the song, before launching into her presenting duties alongside Mirjam Weichselbraun, Alice Tumler and Arabella Kiesbauer.

Green Room host Conchita had a quick change into a tailored navy trouser and blouse combo with a shorter haircut for her backstage chats with contestants.

Plenty of fans were happy to see her back at Eurovision.