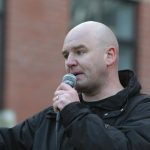 Bills were received by one family whose relative passed away recently, as well as the family of a late prominent Gaoth Dobhair businessman who died 15 years ago.

The families have been in touch with Cllr Michéal Cholm Mac Giolla Easbuig who says they are upset upon getting the bills.

Cllr Mac Giolla Easbuig is calling on Irish Water to review their database in a bid to stop further incidents like these from happening: