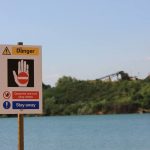 The North's Environment and Justice Ministers have launched a safety campaign aimed at preventing loss of life in disused quarries.

The campaign follows an extensive audit of disused quarries by district councils which helped identify the highest risk sites and the features within each site which make them so dangerous, with a particular emphasis on the fact that water ion quarries is much colder than people may expect.

There have been a number of fatalities in recent years, two teenagers died in a quarry at Annalong in 2013, while the previous year, a 17 year old lost his life in a quarry outside Strabane.