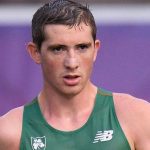 Brendan Boyce had his best championship result over 20k in Spain on Sunday.

The Milford man finished 27th in 1:26:47 at the European Cup of Race Walking which was held in Murcia.

Brendan said afterwards 2It's was a tough build up and fast turnaround to get in shape for 20k after 50k two months ago. I’m so very pleased to get something solid in now. Raced in 30 degrees plus temperatures so if I can hit a 20k right over the next year I'll get under the Olympic standard of 1:24:00.