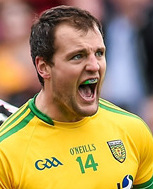 Donegal got off to a quick start and were 3 points up before Darren McCurry scored a goal for Tyrone.

Donegal continued to dominate but Tyrone came back strongly, to take the lead with a few minutes to go to the break.

In the last few minutes Martin McElhinney scored a goal and Colm McFadden added a point to leave Donegal leading 1-8 to 1-6 at HT.