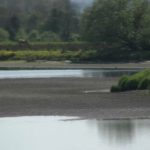 The Loughs Agency says it does not believe the discovery of rotting pig carcasses on the banks of the Foyle this week poses a pollution risk to the river, but it could have implications for farming.

Heads and body parts from at least three pigs were found on the river bank and in the water close to the Burndennet Estuary by Fisheries Officers on Monday.

The Department of Agriculture is investigating the situation, and the Loughs Agency Director of Conservation John Mc Cartney says that will determine what happens next: