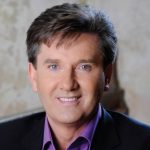 There's been a mixed reaction to a statement from singer Daniel O'Donnell that he intends voting yes in next Friday's marriage referendum.

The Donegal born entertainer's intervention has been welcomed by Yes equality Donegal, but challenged by the Iona Institute.

Speaking on RTE radio yesterday, Daniel O'Donnell said he couldn't see what a Yes vote is going to do against anybody.

The Kincasslagh native added "I feel we're discriminating against a lot of people who feel their lives would be better". Yes Equality Donegal have welcomed his intervention.

Speaking on the issue of children, Mr O'Donnell said he did not necessarily feel that all children should have a mother and a father, saying he grew up with only his mother because his father died when he was very young.