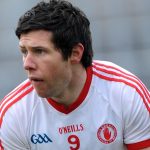 Captain Sean Cavanagh will lead Tyrone against Donegal in Ballybofey on Sunday having been passed fit to start.

The Moy man has recovered from a knee operation and is named at full forward.

Goalkeeper Niall Morgan will miss the Ulster opener having failed to shake of a groin injury.

His place is taken by Michael O'Neill who makes his first championship start while the only debut is handed to Padraig McNulty at midfield.