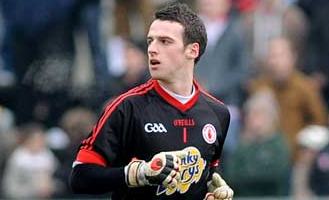 Morgan is struggling with a groin problem, and is having difficulty kicking the ball.

Assistant manager Gavin Devlin said that if the ‘keeper - a renowned dead ball expert - is unable to take kick-outs, he will not be playing at Ballybofey.

Ironically, it was at MacCumhaill Park that the Edendork man sustained the injury on March 29, when the Red Hands crashed to a heavy defeat at the hands of their north-west neighbours.

He was forced out of the action in the first half, and replaced un U21 goalkeeper Sean Fox, who had been drafted into the panel as cover, and standby ‘keeper Mickey O’Neill was abroad on holiday.

Should Morgan fail to make it, O’Neill is likely to start against Doengal, with Fox set for another call-up.