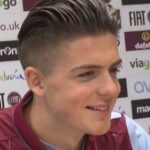 Despite speculation Aston Villa's Jack Grealish has NOT been named in the Ireland squad for next months matches at the Aviva.

Manager Martin O'Neill said he spoke with Grealish and his father recently but the midfielder decided he did not want to be considered for this squad selection.

Depite carrying a groin injury and missing recent matches with his club Captain Robbie Keane is also on the list along with Lifford's Shay Given, Killygbegs's Seamus Coleman and Derry's James McClean.
The game against England is a friendly but the match against the Scots is a must win Euro qualifier.

April 16, 2021
Gardai have reiterated their appeal to motorists to slow down after a driver was detected travelling at almost 150mph in Inishowen this week. The case...