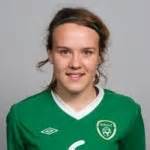 Having made her senior international debut back in November 2012 against USA in Portland, Oregon, Republic of Ireland Women’s National Team midfielder Ciara Grant is looking forward to facing the Americans once again when the sides meet tomorrow at the Avaya Stadium in San Jose (20:06, Live on Setanta Sports).

Grant, from Letterkenny. was second half substitute in the 5-0 defeat and has been regular member of Sue Ronan’s squad since, winning 14 caps in the process, as she juggles her football commitments with her medical studies at UCD. Even though the Irish suffered a heavy loss to the Olympic champions, Grant, who was 19 at the time, has fond memories of the day and her call-up.

Thirty months on and Grant is firmly established in the squad and admits she is a lot more assured than she was back then.

“I am bit more senior in the team now and I am more comfortable. I am not really as nervous as I was then.”

Back then the Americans were on a victory tour after capturing gold at the London Olympics but this time they are preparing for next month’s World Cup Finals in Canada and this match is the first game of a three match Send-off Series. Grant knows that Sunday’s assignment is going be tough, especially with several of the squad’s most experienced and influential players missing.

Now in her fourth year of medical studies, Grant is currently on work placement at St Vincent’s University Hospital in Dublin, and has got great encouragement from her team there as well UCD where she is on a soccer scholarship and plays for UCD Waves in the Continental Tyres Women’s National League.

April 23, 2021
The Nine Til Noon with Greg Hughes - Weekday's 9am to 12noon Magazine type mid morning chat show providing a forum for listeners to express...