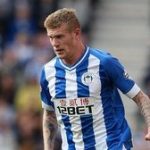 It's reported that James Mc Lean could be on his way to the MLS.

According to the Star he will go to the USA next week with at least two clubs interested in the winger who was recently relegated to league one with Wigan.

Celtic are also trying to sign the Irish international while Orlando City and Colorado Rapids are just two of the American clubs said to be considering a move.