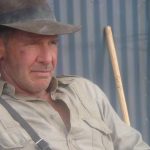 The Indiana Jones trilogy is a pretty rollicking good time and we even heard that there was a fan film called The Crystal Skull which had some decent CG chipmunks in it, but it will never be canon.

More than 25 years after the last entry in the series that we're not ignoring on purpose, it seems there's life in the old hat and whip again. LucasFilm president Kathleen Kennedy has been chatting to Vanity Fair and was pretty clear about their intentions:

"[An Indiana Jones film] will one day be made inside this company. When it will happen, I’m not quite sure. We haven’t started working on a script yet, but we are talking about it."

It's hardly the most shocking news - Disney picked up the property along with everything else in the Lucas vaults back in 2012 so it was really just a matter of time, especially with the goodwill that still exists for the property. With their books so stacked with stars at the moment - from Pixar to Star Wars, Marvel and their own animated movies, there's no hurry to capitalise on the franchise.

Still there have been rumours of the lead being offered to Chris Pratt, which sounds like a fun if obvious choice, and we would be just fine hearing that theme tune in the cinema again.