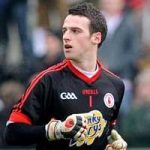 Tyrone have received another boost ahead of their Ulster Championship clash with Donegal.

Niall Morgan has declared himself fit for the O'Neill County having returned to club football with Edendork.

The goalkeeper and free-taking expert had to withdraw from the league clash with Donegal last month and missed the final game of the league with Kerry.

Meanwhile Donegal's preparations step up this weekend when Rory Gallaghers side will spend a full weekend away at a training camp.