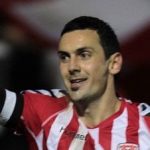 Finn Harps Supporters have joined the growing number of League of Ireland and wider Irish Football community to throw their support behind the Mark Farren appeal. A group of fans in consultation with the club have arranged a bucket collection for the Mark Farren appeal at the Finn Harps home match with Waterford United this Friday (8th May).

Although the Greencastle man made his LOI debut for the Ballybofey club he went on to become record goals scorer for the “old enemy” Derry City, including scoring his fair share of important goals to break hearts among the Harps faithful.

However, old rivalries are irrelevant in light of the ongoing appeal to raise funds to help with Mark’s 6 year battle with a life threatening illness, an appeal which has had a phenomenal response across the Irish football community including donations from Ireland International players Seamus Coleman, James McClean n and David Forde.

Current Finn Harps Captain Kevin McHugh, a friend and former strike partner of Farren’s at Derry City and co-ordinator of the fund raising efforts welcomed the Harps fans initiative “Mark is a proud Donegal man and has great time for Finn Harps” He added “He was saying to me last night how much he appreciates all the well wishes from Harps fans online”

Finn Harps FC themselves are one of a number of clubs to sponsor a table at the upcoming Dinner Dance and Auction fundraising event at the Everglades Hotel on 23rd May. The club and its supporters hope the recent bumper crowds attending on Navenny Street will give what they can to help the cause.

Visit www.markfarren.com for further details on the campaign and to find out how you can donate.