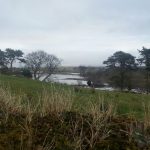 A Donegal Councillor is calling for the fast tracking of proposed sea defences for Creeslough.

Councillor John Sheamais Ó Fearraigh made the comments following recent discussions with An Bord Pleanála about the reinstatement of the area’s coastal defences which were destroyed last year.

That caused the flooding of some 64 acres of nearby farmland in Creeslough.

Just over €100,000 has been secured from the government for this work to be carried out, but repairs were later delayed because the area is classified as an area of conservation.

An Bord Pleanála says it will assess the situation as quickly as possible, Cllr O'Fearraigh says it's vital that this is done............