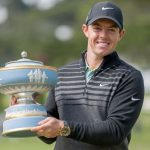 The world's top two players have been paired together for the opening two rounds of the Players Championship this week.

Rory McIlroy and Jordan Speith have been grouped with Jason Day at Sawgrass in Florida.

The Ulsterman will enter the Players of the back of victory at the WGC Matchplay Championship in San Francisco.

Padraig Harrington and Graeme McDowell will be in the same group along with Ryan Palmer.

And Tiger Woods will make his return to action alongside Martin Kaymer and Adam Scott.