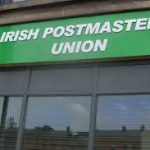 The Donegal Representative of the Irish Postmasters Union says the threat to the post office network in Donegal remains as strong as ever.

Breid Gallagher was speaking ahead of the annual conference of the IPU which gets underway in Kilkenny this weekend.

Amongst the motions on the agenda will be a proposal that the Union will run candidates in the next General Election.

Breid Gallagher says that could form just a part of their plans to keep post offices open: