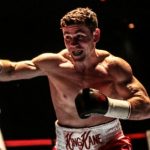 Dungiven’s Eamon O’Kane fights on his home patch on Saturday night where victory would open the doors to a possible IBF world title shot.

The Derry middleweight will defend his IBF Inter-Continental title against unbeaten Englishman, Lewis Taylor at the “Time is Now” show in the Lavey Community Centre.

The winner of the fight will go to number 3 in the rankings so O’Kane could find himself a mandatory position to fight for a world title.

There will be celebrities in the audience, such as George Groves, & his father, coach Paddy Fitzpatrick, Anthony Tohill and few other surprise guests on the night.

Eamonn is Commonwealth Gold medalist 2010 and is quickly knocking his way through the ranks in the Professional industry..

Tickets are still available- and you can PAY AT THE DOOR!!!! Tickets are £40 & £65 ringside! Or buy online at www.kingkane.com