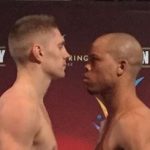 It's been a golden first year with Golden Boy Promotions for the Donegal man who has had five wins from his first five professional fights.

35 year old Joshua Snyder who has a career of 9 wins and 11 defeats is next in line for Quigley.

The fight is Jason’s second in Indio and it will be broadcast on American Fox Sports Tv with a scheduled start of 3am a Irish time on Friday morning.