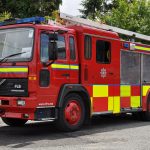 A woman in her 50's is being treated for burns after a house fire in Derry.

It happened at Moyglass Place in Strathfoyle shortly after 10 o'clock last night.

Three fire crews from Derry and one from Limavady attended the scene. The woman had already been rescued from the house by a neighbour.

It's not known how the fire started.