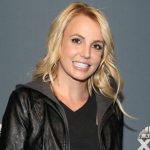 Britney Spears has reassured her fans she’s doing fine after she had a “scare” on stage.

The pop princess hurt her ankle during her Planet Hollywood show in Las Vegas.
Fans expressed their relief that the star was OK after saying that they had seen her fall.
It’s not the first Vegas stage mishap for the singer this year. Back in March she made headlines when her hair extension fell out during her energetic performance.

Meanwhile, Britney is following in the footsteps of Kim Kardashian and Katy Perry – by getting her own mobile game.

Glu Mobile said that it had signed a five-year deal with the singer, with the possibility of a three-year extension.
The game will feature the star’s likeness, voice and “creative influence” and will be launched in the first half of 2016.
“I am thrilled to add Grammy Award-winning legend Britney Spears to Glu’s growing list of partners as we continue to expand our celebrity gaming platform,” said Glu chairman and CEO Niccolo de Masi.

Kim’s game, in which players try to become celebrities, launched last summer and has been a big hit.