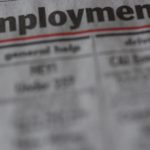 The numbers signing on fell in all of the Social Protection offices in the county.

The sharpest fall recorded in the eight Donegal offices was 17% in Ballybofey, where there were 2,167 people signing on.

Falls of 12% were recorded in Buncrana with 3,410 people on the register and Ballyshannon, where the figure was 1,290. Letterkenny had 5,183 on the register, a fall of 10%, the smallest fall of just 3% was recorded in Dungloe, where there were 1,840 people signing on in April.