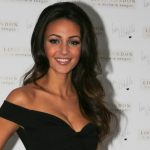 Michelle Keegan has been crowned the world’s sexiest woman – in a list also featuring Susanna Reid and Mary Berry.

Good Morning Britain presenter Susanna is 21st on the list, while 80-year-old Great British Bake Off judge Mary is at number 73, only one place below Angelina Jolie.

Cheryl Fernandez-Versini drops 55 places this year to 68 in FHM’s 100 Sexiest Women In The World list.