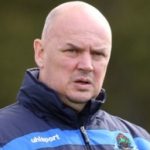 It was a difficult campaign for the Drumahoe side who finished bottom of the table on 21 points with just four wins from their 38 league games and in the process they conceded 84 goals.

In a statement last the club said "Following a meeting on 27 April, the committee has decided to relieve Paul Kee of his duties as team manager,"

"It is with much regret that we come to this decision and we would like to thank Paul for his efforts and wish him all the best in the future,"